Playing Twister with the facts

You know Twister ("The game that ties you up in knots!"), where you have to twist your body into weird unnatural positions so you can touch two points far apart? I expect the wonderful people behind "Mothers and Fathers Matter", the anti-Marriage Equality campaign, are very fond of that. It's what they base their reasoning on. 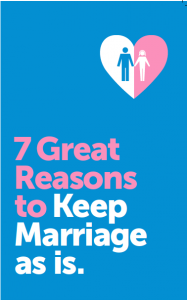 As part of their campaign to keep discrimination in marriage, they've produced a glossy leaflet called "7 Great Reasons to Keep Marriage as is". With a title like that it's clearly not aimed at floating voters - it does not engage with any of the arguments of the Yes side. The purpose is plainly to provide No voters with socially acceptable reasons to deny gay people the right to marry.

And it's full of the kind of arguments that you'd expect. Red herring speculation ("The courts could decide that the right to marry grants same-sex couples a constitutional right to procreate"), dog whistles (a yes vote makes the rights of children "secondary to the desires of adults"), Back-of-The-Bus pleading ("Civil Partnership Already Gives Legal Rights") and an assertion that "protecting difference is not discrimination".

But for those averse to change, there's more. Say hello to same sex marriage, and you may as well say goodbye to your mother.

Okay, not your mother, but Mother's Day:

"In North America where c.1.6 percent of adults self-identify as gay some schools have been asked to stop celebrating Mother's Day on the basis that it discriminates against children brought up in a same-sex household."

And just to make sure we don't think they're making stuff up, they even include footnotes. Which are web links, so if you wanted to check them - just in case - you would of course have to type them into a web browser.

So - not that we doubt them (perish the thought) let's do that, shall we?

The first link is to a paper from the US National Center for Health Statistics.

Does it say that 1.6 percent of North American adults self-identify as gay?

Yes, it does! Well played, Mothers and Fathers Matter! Actually, these figures only relate to the United States, not North America, but obviously that's not important.

The second footnote supports the statment that

Some schools [in North America] have been asked to stop celebrating Mother's Day on the basis that it discriminates against children brought up in a same-sex household.


Here it is. Check it for yourself. Go ahead, we can wait.

And what happened in this school? They decided to celebrate the International Day of Families instead of Mother's and Father's Day, to 'celebrate diversity and inclusivity while avoiding making children who are part of non-traditional families feel left out'.

So what the footnote actually supports is that

A school in Canada celebrates the International Day of Families instead of Mother's and Fathers Day, so all of their children feel included.


You would think that an organisation that cares so much for the feelings of children would be able to get behind a initiative to make kids who don't have a traditional family set up (much more likely to be kids of single parents rather than gays, who, don't let's forget, only make up 1.6% of the population) feel more secure.

Apparently not. Much more important is playing Twister with the facts so you can keep discriminating against gays.

Mothers and Fathers matter, it seems. Facts, not so much.

Rodney
I'm afraid of forgetting. That's why I write here. But mostly I forget to write.